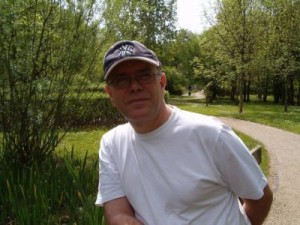 I fell in love with writing when I was at primary school! I wrote some daft sketches and my friends and I performed them. To my amazement our audience of children and teachers actually laughed at the jokes and clapped at the end of the sketches. I was entranced by this unexpected opportunity I had been given to gain appreciation, which hitherto had been pretty thin on the ground and in particular to entertain others.

Years later, I made the mistake of training to be a primary school teacher, thinking I would have plenty of time to write during the holidays! Ha! However, my grim experience of being forced to grind out the National Curriculum inspired me to write maths-based and science-based stories, sketches and poems, along with pieces to stimulate creative writing as one means of mitigating the National Sausage Machine of Education that children have to endure – and hopefully now helping them to see that learning can actually be fun!

I fell in love with writing when I was at primary school!

After having my first book published in 1996, I began visiting schools as an author in 1998. I have since visited schools all over England & Wales, presenting my work, which has been published in the UK, Spain, the USA, New Zealand and Australia. I have given workshops to teachers in England and Northern Ireland and have also worked with children at International Schools in France, Germany and Egypt and at a SCE (British Services) school in Bergen-Belsen, Germany. 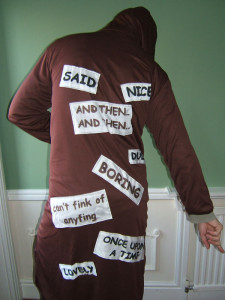 Creative writers Steve Way and Conrad (Con) Burdekin are available to work with children inspiring creative writing throughout school. If required they could also give assembly or after school presentations sharing a range of their poems, sketches and stories. Please invite them to your school so you can enjoy their zany interactive work!

Steve had his first book (“Gary and the Invisible Goats”) published by Ginn in 1996 and has been writing for children since then. He writes ideas to stimulate creative writing (as found for example in his book “Crazy Ideas!” published by Claire Publications) and stories, sketches and poems that interweave maths ideas and science ideas into the plot (as found in the “Using Stories to teach…” series published in the UK by Hopscotch Educational Publishing and on the web-site www.counton.org 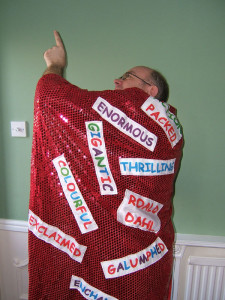 Con is a very popular visitor to schools, particularly in the Wakefield area, inspiring children’s writing with his effervescent personality and endless creativity. (Don’t worry he’s not a big-head it’s Steve writing this bit!) Con’s first collection of poems (“The Hungrumptious Blumpfh”) was recently published and sells in eye-wateringly huge numbers particularly after reading them in schools he visits. (It’s still Steve writing this part! Grr!)

When visiting schools, Steve and Con often team up to take on the roles of “Story Man” (Hurray! Played by Steve – of course!) and “No-Plot Person” (Boo! Played by Con).

“No-Plot Person” attempts to drain the children’s imaginations from their brains by reading them his evil stories, “The boring tortoise” and “A very nice day”. With the children’s help, “Story Man” attempts to build up an imaginative force-field strong enough to repel the super villain from the school. We predict that once again this titanic struggle between good and evil (well Steve and Con, really) will be continuing – taking place in school… all you have to do is invite us!

I would like to thank the following incredibly talented people for their help in creating a web-site that I couldn’t have imagined being as wonderful as it is, even though it’s only about me!

Noha Kamal – An incredibly talented photographer who took most of the photographs used on the site when I visited the British School of Egypt in Cairo and who, along with the rest of her lovely family, made me especially welcome in Egypt.

Dr Ashraf Moussa – For not only being kind enough to show me around Cairo, sharing his incredible knowledge of Egyptian history (and some of the worst jokes I’ve ever heard!) but took the photograph of a daft bloke standing in front of the pyramids of Giza!

John Welding – A gifted illustrator who I’ve had the privilege of working with two projects and who kindly gave me permission to use some of his illustrations on this site.

Richard Gentle –  Web designer extraordinaire! (Being a modest man he’s going to hate this as it’ll be Richard putting this up on the site! Sorry Richard but the proof is in the pudding with this site – and check out the other site’s he’s designed folks!) Richard’s greatest talent is being patient with twits like me who find it difficult to negotiate this newfangled technology without getting hopelessly entangled or inadvertently causing a national catastrophe! (You’re too kind – Richard